“This is the story of how a middle-aged spinster lost her mind, deserted her domestic gods in the city, took a furnished house for the summer out of town, and found herself involved in one of those mysterious crimes that keep our newspapers and detective agencies happy and prosperous.” (Rinehart, 1)

The Circular Staircase was the novel that took Mary Roberts Rinehart’s career from zero to sixty. Before the novel was published in 1908 Rinehart was a housewife and mother. She would help in providing for her family by writing plays and short stories as well as a few novels. Her husband, Stanly M. Rinehart, who was a doctor took little interest in her work. Before the success of The Circular Staircase he considered her writing to be little more than a hobby (Cohn). After her success she was able to pump out several books or plays a year. This waned as she grew older. After 1929  she would publish one, maybe two pieces in a year, but many years went without seeing a play or novel from the prolific author.

While she was in the height of her creative success she was quoted having said, “[I have] never written a detective story (Harvey-Breit from Rinehart, 279).” For the story, The Circular Staircase, this is absolutely true. Being set in rural America, in an estate called Sunny Side, we get to know the main character and Narrator, Rachel Innis. She is not a police detective or private eye. Rather she is a wealthy widow who doesn’t mind sleuthing (or snooping) in another person’s business. She is even in direct conflict with the police detective assigned to the case by hiding evidence.

The story begins with Rachel Innis accompanied by her niece and nephew, Gertrude and Halsey Innis, as well as her servant and friend, Liddy Allen, to a summer house called Sunny Side. Rachel rents Sunny Side for the summer while her apartment is being renovated. They spend one peaceful night in the house before the shot in the night that leave Arnold Armstrong, the son of Paul Armstrong the owner of the house, dead on the front porch. What ensues is the story of Rachel digging up clues as they appear and sniffing around to find out who has done what and when during the various incidences of the next few days.

One example of the books cover.

In her attempts at finding the truth she deliberately hides evidence from Detective Jameson to spare her companions from the embarrassment of police investigation. But, since the story focuses on her and her actions it would be hard to say that this is in line with the traditional detective story. Because the cast is contained mostly contained in the summer house, only letting Rachel Innis leave to consult the police, the story falls snugly into the cozy style.

This was Rinehart’s go to style due to her affinity for characters over clues. She preferred to work her novels by producing intriguing human interaction: showing suspicions, pitting person against person, family against family. If The Circular Staircase had been written in a more traditional way, having clues be the major driving force, the story would have been much drier. The interactions between Rachel Innis and the other occupants of the house is what I feel makes the story compelling.

It is true that a cozy uses the emotions and interactions of its characters along with evidence and clues to drive the story; however, The Circular Staircase is unique in because of its narrator. Rachel Innis is not a detective. She does sleuth and find information, but her active defiance towards the police and her lack of forethought do not allow her to be the detective. To further complicate her role in the novel, the actual detective, Detective Jameson, does very little in the way of protecting or even detecting. Instead he waits for the residents of Sunny Side to tell the truth. In one instance he walks around the front of the house to see a gun sized depression in a shrub, the gun had been previously picked up by Rachel Innis. He proceeds to question her and accept a lie only to reveal he knew it was a lie right before the climax of the story. As a narrator I find her to be honest with her audience. She tells her story chronologically and without omission. She excuses all of her lies and deceptions to the reader as they occur. 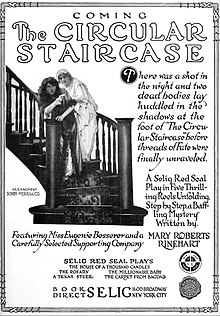 Advertisement for the 1915 film adaptation

Since she is not a detective by trade I cannot say that Rachel Innis is a detective. In addition, she impedes the process of justice and works off of intuition and interactions rather than hard evidence. If this were not the only book to have Rachel Innis in it as the investigative character then she may be easier to define. In fact, to call her the investigator is probably the most apt definition of her character.

Rachel Innis may stand out among the other heroes of detective novels; but does this story hold up to the tradition of a detective novel? Simply put, yes. The conventions of a traditional cozy are there. It has a limited cast pertaining to a few members from two families: the Innis’ and the Armstrong’s with a smattering of supporting characters. It also sticks to the idea of promoting character development. This is possible through the cozy’s limited cast and location. The setting of Sunny Side is perfect for keeping the action contained. It does stray, as I have stated above, because of the issue of defining Rachel Innis. It also strays at the very end when it becomes a pseudo locked room mystery. Rachel finds herself trapped in the attic and must figure out a way to save herself or be saved. The ending, I will remain a mystery for you.

The novel holds up to this day even after its initial hype that spawned a film in 1915. both rely on the stories sense of humor and likable cast of characters to keep it entertaining for over one hundred years. It is a witty and compelling read that accurately captures the feeling of a rural upper-middle class mystery. It contains masterful character development that engages the reader and promotes a desire to analyze the people alongside Rachel. And by taking a critical view, the novel is also a great example of feminist literature. Showing that a single woman can solve a mystery and simultaneously protect herself and her loved ones from a mysterious killer and antagonisms from another family. Unfortunately for the reader, the narrator gets a little dry when the action plateaus. Overall, I would recommend this to anyone who is searching for an interesting look into detective fiction and doesn’t mind a bit of bickering.