Wicked Autumn by G.M. Malliet has one of the most interesting protagonist concepts I’ve ever seen. Max Tudor is a M15 agent turned Anglican clergyman. He is the most mysterious and attractive Vicar I have ever heard of. This novel takes this man with an already interesting backstory and turns him into an amateur detective, trying to solve a murder mystery. A local woman, Wanda Batton-Smythe, is a very active member of the community and a very brash, disliked person. When she is found dead on the day of Nether Monkslip’s Harvest Fayre she had worked so hard to put together, Max calls on his government agent past to help figure out exactly what happened. 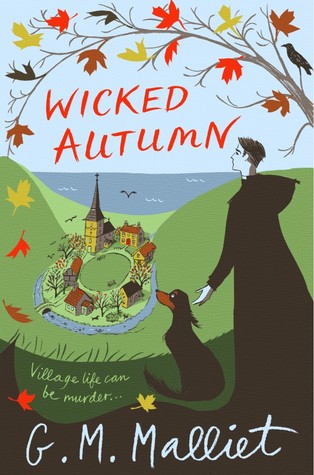 Max Tudor is a very likable character, and was the saving grace of this novel in my opinion. The story is told through a third person narrative, but we still get to see inside Max’s head and his inner thoughts are great. At one point he lies to a man about enjoying the book he had written, buys a second copy from him, and then mentally asks God for forgiveness for his lies. The book is filled with other interesting characters, but Max Tudor takes the cake.

One of the downfalls of this novel is that it almost tries too hard to be a cozy. It spends a very long time building the world in which it takes place, and helping the reader get to know the setting of Nether Monkslip. This is fine, and I like the sweet English village atmosphere, however this setup takes forever. The murder does not occur until over seventy pages into the novel. It is agonizingly slow to take off. Things pick up later in the book, but it took a lot of effort to get to that point.

Wicked Autumn was published in 2012, but sometimes this was easy to forget. The language that Malliet uses in the novel is very formal, and part of me believes that is because she is trying to embody some kind of quaint English charm. I found myself imagining a 1940’s town, and was continually surprised when there would be a mention of Hugh Grant or the concept of social media.

The book was shortlisted for the Agatha Award for best traditional mystery novel (as were the three Max Tudor novels following it), and it is very unsurprising. This heavily reflects Agatha Christie’s writing, and it fits comfortably within the tradition of the cozy. There is a limited cast of characters in a confined paradise small-town setting. I’d even go so far as to consider Max Tudor to be a modern day take of Chesterton’s Father Brown.

The concepts and themes were intriguing and sat very well with me as a cozy fan. I appreciated the subtle humor and the charming characters, but I wish that it could have been a little more fast paced and just a little bit less cliched. The ending was a little predictable and could have been more satisfying, but it was not in any stretch of the mind bad.