Tony Hillerman’s novel, Skinwalkers, is a tale of deception, intrigue, and mysticism. Taking place in New Mexico the story follows two police officers, Jim Chee of the Navajo Tribal Police and Lieutenant Joe Leaphorn, as they try to solve the murders of four people connected by a common clue. The novel switches perspective between Chee and Leaphorn; but, stays consistently in the third person point of view. Hillerman takes us down a road of mystery and mysticism that both tells the reader a bit about Navajo tradition and compels us to read on.

Artist rendition of a skinwalker.

The story begins with Chee sleeping restlessly in bed only to be woken in the wee hours of the morning by the thought of the work to come, a case of theft and another involving three (soon to be four) murders yet unsolved. He is fully awoken by a shadowy figure lurking in the darkness, he thinks it is the shy girl he had seen the day before, when through the darkness a gun shot sounds and the sides of his trailer are turned into Swiss cheese and his bed, which he had sprung off of milliseconds before, torn to shreds by the shot gun pellets. He goes to the work and reports the attempt on his life and is partnered up with Lieut. Leaphorn for his protection as well as to help Leaphorn solve the case of the murders. The only thing is that they take place over a hundred miles apart. The story goes on to involve a Doctor, Dr. Yellowstone, and a lady, Irma Onesalt, her list of deceased persons, and her murder. Not to mention the ravings of a mad woman and her conviction that Chee is actually a skinwalker.

The title of the book, Skinwalkers, may  turn some people away with its implications at first glance. I found this to be true for myself when I first picked up the book. I then did some research into what a skinwalker was and found it has is a belief that is ancient and still held on to by some to this day. A skinwalker, or yee naaldooshii, is not a monster but a person trained in medicine or healing who has taken their skills and tainted it with murder of a close relative in exchange for power. They are “[people] who have acquired immense supernatural power, including the ability to transform into animals and other people” (navajolegends.org). Also in the book there is reference to another spell called “a bone.” It is mostly talked about towards the end of the book, during the final confrontation. Based on the dialogue it is a curse placed by a witch or skinwalker physically in a person by blowing a bone in “through a little tube” which causes a slow death (Hillerman, 80). There is also a form of good magic in the story, Chee refers to himself as a “singer” and “yataalii,” which loosely translates to healer (194). He is able to use this to save his life when confronted by his attempted assassin. 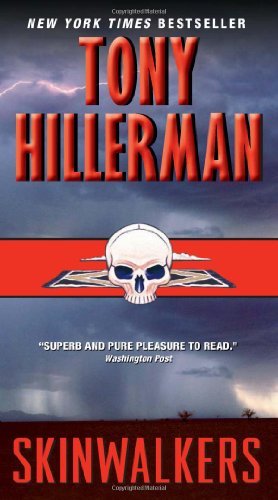 A recent version of the cover.

The story as a whole fits into an alternate form of police procedural. Hillerman decides to use an alternating point of view between Chee and Leaphorn, leaning towards Chee’s point of view. Chee is definitely the major focus of the story, having most of the action happen to him. I found myself liking both characters equally. Their individual ways of problem solving complemented the others character and left me hanging on every word.

This is the seventh novel in the Chee and Leaphorn novels, both have been established and do not develop much in the way of finding out who they are, rather we see them in a comfortable and almost natural way. They go about their business and look into the crimes bouncing off each other to keep their characters in play. They each have their moments where we see from their perspective and we can hear their thoughts on a situation. At times they are separated and we even see, what I’ll call, the catching up process. A prime example is the climactic final events where Chee and Leaphorn are separated with Chee’s life on the line. They come to the same conclusion only hours apart and fill each other in as they can. If I were to give this novel a sub genre within the genre of police procedural I would have to call it a buddy cop novel.

As I read this book I was reminded of similar authors; like Clive Cussler and Rudolfo Anaya. Clive Cussler’s novels have a similar style to Skinwalkers. His novels in The NUMA Files series are reminiscent of police procedural novels with a twist of espionage. They also share a similar buddy cop vibe by having a group of close characters working towards a common goal.

Rudolfo Anaya’s novel, Bless Me, Ultima, contains similar setting and belief systems to Skinwalkers. In Bless Me, Ultima, the wise healer, Ultima, is charged with being a witch is attacked frequently physically and verbally. Since Skinwalkers was published in 1986, fourteen years after Anaya’s novel, it would not surprise me to lean that Hillerman was influenced by Anaya’s representation of native culture in the southwestern United States.

Skinwalkers is in all an easy read. The language is sometimes tricky to understand because of the language barrier; but, I did not have an issue once I looked up the meaning of those words. I would recommend this book without hesitation. My initial feeling was that the book was too easy to read. I found towards the end of the novel that the ease of the read only made the action more palpable. If the language had been more difficult it would have driven a reader away because of the somewhat lengthy lulls in action that occur and the language of the Navajo sprinkled throughout.