This is a story of  one simple thing: Revenge.

Mike Hammer’s friend, Jack Williams, is murdered in a terrible way. Now Mike, your classic hit-first-then-ask-questions private eye, is on the hunt for the killer. Only he doesn’t want them to go to jail. Instead, Mike is going to kill them the same way the murderer killed Jack – slow and sitting back to watch them die.

Mike Hammer is a private eye in New York city. He’s a WWII veteran, forever a bachelor, and loves his gun more than anything, except maybe his secretary, Velda. He is a true hard-boiled detective, and possible alter ego of his author, Mickey Spillane (Peters and Zangwill 1988).

Check out a trailer for the 1953 version of the movie!

“I NEVER WANTED THE WORLD!”

Overall, I, the Jury did not recieve stellar reviews. Many critics claimed that Spillane’s writing was “too violent and too sexual” (Ramsey, 2017).  While this was probably true in the time of the novel’s release (circa 1947). Even Spillane said about his work, that it was “garbage, but good garbage.” (Peters & Zangwill 1988) Another one of the book’s biggest critisms is the treatment of women (Peters & Zangwukk 1988).

However, I believe that the book would not have the same fate today. In a world now populated mostly by sex and violence, I, the Jury fits right in. None of the violence is too extreme and Spillane doesn’t go into specific detail about Mike Hammer’s exploits. The writing also flows really well in the form of casual writing we have today. The treatment of women would still get a lot of critism – it’s also so unrealistic that every woman is throwing herself at him. 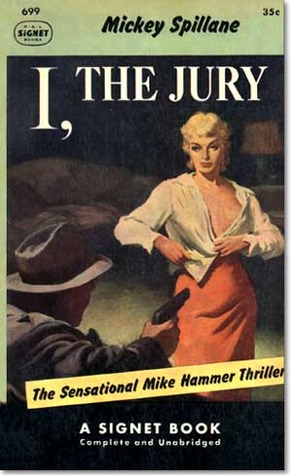 A cover of I, the Jury. Image courtesy of Goodreads.com

I, the Jury is a hardboiled detective novel through and through. You can see that by the nature of Mike Hammer, who doesn’t take flack from anyone. He is forceful in the nature of his interrogations, quick to pull his gun, and almost never sorry for any toes he may step on. The novel is also fast paced, slightly violent, and of course has a character that seemed to have been born with a chip on his shoulder.

But did it stand the test of time? In 2001, critic Terry Teachout wrote an article where he said “the early Hammer books, which sold some 130 million copies, have long been unavailble, even in paperback.” While it is true that the popularity of the genre is not what it once was, there are still many people reading within the genre. Part of the decline in popularity of the Mike Hammer series could be due to the portrayl of women and men that does not appeal to the modern reader.

I don’t like hardboiled novels. But this book made me want to read more. For a novel written in nine days, it was pretty spectacular (Ramsey, 2017). The writing was witty, the characters were interesting and well developed, and the plot twist kept me on my toes. The treatment of women within this book is pretty bad, but if you are able to keep the time it was written in mind you can get through it. I would highly recommend this book to anyone, but would have to put a warning for the violence within it. Overall, however, this novel gets a 10/10 from me.