Welcome to the exciting world of Detective Harry Bosch!

The Black Echo by Michael Connelly was the beginning of the Harry Bosch detective series. Bosch was a hardboiled homicide detective and a Vietnam veteran. He is described in the book as a “methodical, traditional, and superstitious detective” as well as “wiry” and “small” but with strength no one can see (Connelly 1993, pg 10-11). Bosch is presented as a hard and dedicated worker. He is smart, brooding, and graying. He works as a detective for the LAPD department, homicide division. Bosch is also haunted with the memories of Vietnam, and dreams about his time there as a “trench rat.” Others have described Bosch as being “haunted and tormented.” (Branscomb, 2017)

The Black Echo takes place in Los Angeles, specifically in Hollywood. There was a body found in the mud pipe of the dam. Worst still, it was the body of someone Bosch served along with in the war. He’s determined to find what happened, no mater what it takes.

Here’s a trailer for the TV series!

Michael Connelly was born in Philadelphia, PA in 1956 and grew up around books. He decided from a young age to be a novelist and became a crime reporter to get the best insight for how to be the best he could be (Abbot & Davies 2008).

The writing within this novel is beautiful. Connelly’s use of metaphors as description was so poetic. This style allows the reader to put themselves into LA and into the life of Harry Bosch. The chapters were a little long, but they were well executed. Connelly had a way with words. 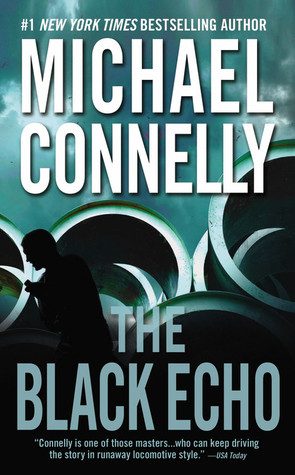 Cover of The Black Echo, courtesy of goodreads.com

There are three types of detective fiction: Cozies, Hardboiled, and Police Procedurals. For The Black Echo, it’s hard to distinguish if it’s more of a hardboiled novel or a police procedural, simply due to the conflict between Bosch’s job and his own nature. Therefore, I believe it’s best to say that it is a hardboiled-police procedural hybrid. However, that does not mean that The Black Echo doesn’t fit into the tradtion.  Within this novel, Connelly focused on the psychological makeup of his characters which added to the tradition. (Abbot & Davies, 2008). The Black Echo takes its’ readers on a journey through the mystery that also involves diving in on not only the other characters but on the detective themselves — something not seen by me in my overview of detective fiction. Something that carves out it’s own place within the genre.

The novel was even well recieved by critics. Connelly recieved praise for his style of wiritng, especially since he did focus on the psyche of the characters. Jeff Ayers said that “…Connelly explores human elements that force us to confront the big questions…” Which means that within this novel, it’s easy to place yourself within Bosch’s shoes.

Cover of the Black Echo, courtesy of amazon.com

This book was beautifully written. I was able to feel connected to Harry Bosch and found the plot to be thrilling. The chapters were a little long for my taste, however, and I’m not a huge fan of the hardboiled style of writing. For me, however, it was interesting to see the way the detective’s mind works, especially seeing what keeps him up at night. I would highly recommend this book to anyone who would enjoy hardboiled novels, and who enjoys getting a psychological insight to characters.

Goodreads.com (2017). Cover of the Black Echo by Michael Connelly. Retrieved from: https://www.goodreads.com/book/show/32508.The_Black_Echo